We are lucky in Ireland to have so few climbers and so much mountainside and coastline to explore looking for unclimbed rock. There are first ascents for anyone prepared to put in a little work. It's even possible to scramble about in the scree in Glendo, the most popular bouldering area in Ireland, and find new problems. Even in Fontainebleau, the largest and oldest bouldering area in the world there are new problems of all grades to be discovered. This is due to two factors, bouldering is relatively new so we are early on a steep curve (call it the 'golden age' if you want, which John Sherman defines as a period when three star problems of all grades are abundant and undone) and secondly it is an accessibile activity (ie. solo, without a lot of equipment and time). The first might hold for routes but the second definitely doesn't as new routing is very demanding of time and commitement.

When I say new I should probably prefix it with 'possibly or as far as I know ' but that gets a bit tiresome quickly. But the fact is you can never be sure. This issue isn't unique to bouldering, what about Everest, did Mallory and Irvine do the FA?. But as bouldering has only recently been seen as a significant and noteworthy aspect of climbing and ascent of a boulder leaves little mark of its passing this issue is more of a factor in bouldering than other activities.

This article by Chris Redmond about his visit to Glendalough five years ago illustrates this nicely. Chris visited Ireland from the US and climbed a load of problems and then went home. Later some locals come along and climbed the same problems (Chillax, The Fin and King Cobra for starters) assumed they were first ascents and named them. 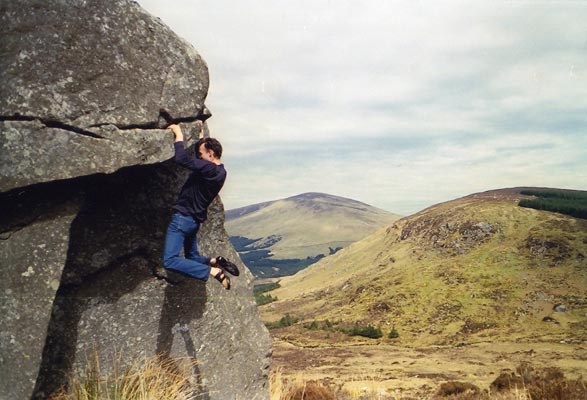 Bouldering has only been recently been considered worthy of documentation so there is real lack of history. In a place like Glendalough where the boulders are on route to a very popular crag it's no surprise that some problems were done a long time ago but who did what when is lost in the mists of time.

In contrast areas that have been recently discovered are often better documented for example in North Wales 80% of the boulder problems in the graded list in Simon Panton's guide were done post '97 and the first ascentists are known.

Not every piece of new climbing will be recorded, this depends on individual's perception of what is worthwhile. For example the Mall Hill bouldering area was revealed a few years ago when a large swathe of forest was cut down, some routes were also climbed and claimed on the two crags, however some of these routes were climbed back in the day before the trees were planted. They were never recorded as according to the first first ascentist " at that time anything smaller than Twin Buttress was not considered climbing, how things change".

When discussing first ascents and guide books someone will always say "We should keep quiet about new areas and let people discover them for themselves?", this is an approach favoured by a lot of surfers.

I understand this attitude when there is an extremely limited resource but this isn't the case with bouldering in Ireland and anyway only a minority are interested in exploring so the majority will miss out on the undocumented climbing and will be concentrated on established, well documented areas. Secondly non-locals with limited time will miss out on lots of good stuff, how would you like it if there was no guidebook to Font and you had to wander around looking for the boulders?

Having said this I don't think that there is any need to exhaustively catologue every variation and problem in every bouldering area. Often these variation or eliminates are best discovered for one's self (or not at all). 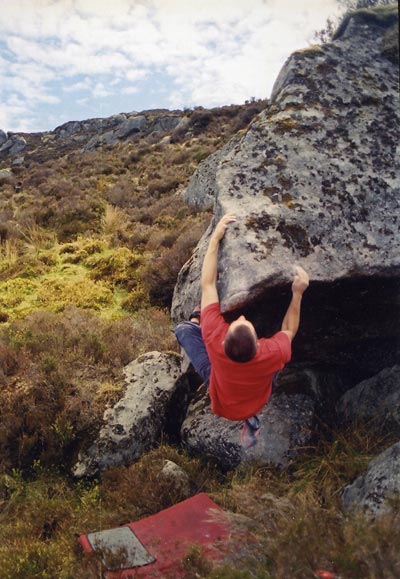 The reward is the same, a first ascent, but what is being rewarded is very different. The explorer is rewarded for their vision in finding the new line and persistence in searching for new areas. The 'last great problem' climber is getting pay back for their training and talent.

A few years ago Andy Robinsion cleaned an amazing arete in Glenmacnass, the first bouldering meet was approaching and the fear of his first ascent getting 'robbed' was the motivation that got him up Solidarity just a week before the meet.

This drive for the first ascent can be seen in all aspects of climbing. It can result in some shit route and problems, how many routes are cleaned, climbed and documented only to never be done again? 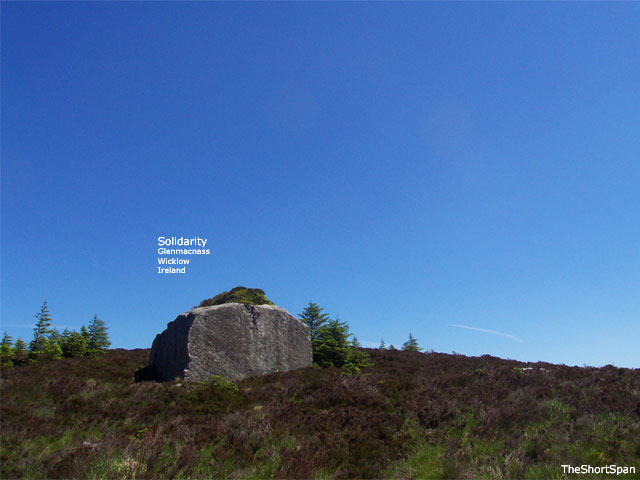 Climbers place a value on first ascents. This value has consequences for the wider bouldering community as more and more bouldering is discovered for all to enjoy. However the golden age of exploration on this planet is over. The poles have been visited, Everest climbed. However the instinct to explore is still there, it's part of our natural curiosity to see some boulders up on a hill and wonder if they are any good. Maybe one damp day you decide to walk up to them and have a look, if they are good you get excited and come back as soon as possible and climb all you can.

A chalked hand and rubber shod foot leave little mark of their passing especially once the rain has washed the chalk away, so most FAs leave no trace. Of course some leave their calling card in the form of heavy handed wirebrushing or chipping but that's another story.

When John Gill was asked if a FA of his later turned out to have been done previously, would he be disappointed?

I think I probably would be disappointed - at least a little. I viewed bouldering much like creative math - the extra excitement of getting a result first. Of course, when I was active, bouldering was not very popular, so I usually didn't have to contend with this situation.

Again, like mathematics, There are many mathematicians who eagerly work on solved problems as a form of competition and sharpening of skills. That wasn't me. I enjoyed the research part of my doctoral program much more than the classwork leading up to it - many in similar programs feel the opposite.

If the emphasis is on solving the problem then it shouldn't matter if it has been done before once you don't know the solution. But the reality is that there is something special to it, a primitive human satisfaction in being first. 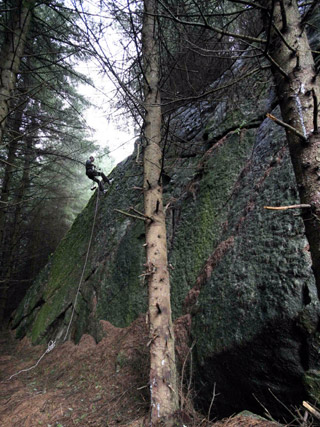 It's my opinion that the first ascent is only really of significance to those directly involved, the important aspect for the wider community is the word of the ascent being spread. If a first ascent is incorrectly claimed this might force the actual first ascentist out of the woodwork, the first claim caused this to happen.

One is never obliged to report anything you do and some people are more willing to share their conquests than others (when take too far Americans call this 'spraying'). However by saying nothing you are relequinshing your right to complain when someone does the 'first ascent' of your problem.

We should be grateful to those who are out there finding new problems, cleaning, climbing them and spreading the word. There are at least two companies offering prices/rewards (Revolution Climbing and DRTopo) to people who submit guides to new bouldering areas maybe this is the beginning of a movement away from sponsoring just the best climbers and encouraging people to get out there and explore. 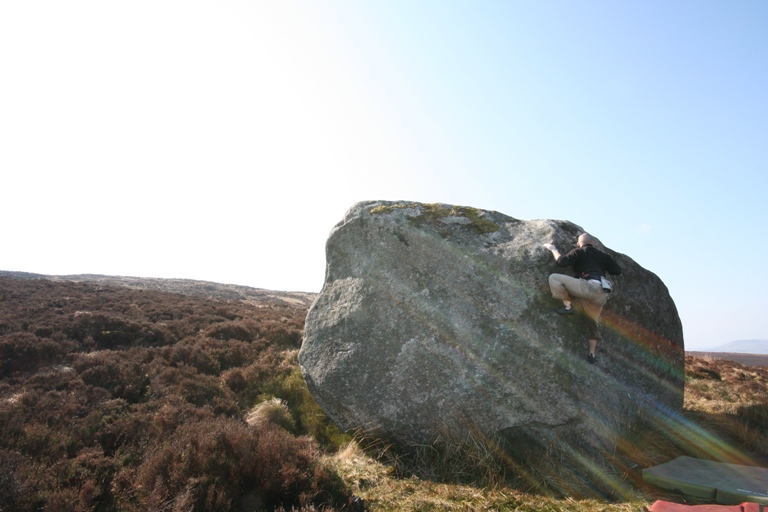 John Gill said when asked about the importance of first ascents "My approach in the 1950s and 1960s centered on exploration and first ascents. I was never very interested in doing something that had already been done, when there was so much out there to discover - so many untried problems to solve." more here.

Porth Ysgo in North Wales was rediscovered as a bouldering area in the late 90s. The boulders had been first climbed on the in the 70s and even featured in a Stone Monkey ad in the early 90s however it took a new generation of Welsh boulders to raise the profile of the place so that now its an essential stop on the North Wales bouldering circuit. I suppose that a discovery has to come along at the right time to be really appreciated by the masses. 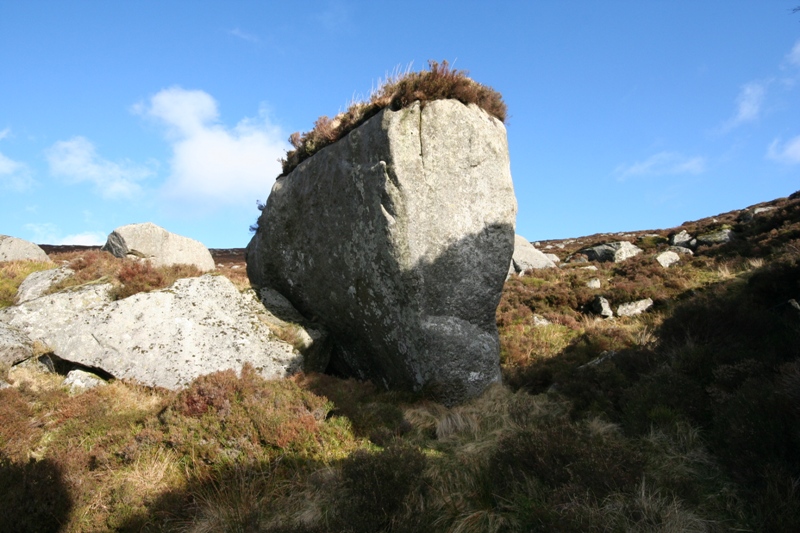 For me the whole process is very pleasurable. The hard yards exploring, the 'moment' when you walk around the corner or over the hill and the boulder still looks good, the last few yards to the boulder you speed up, throw down the pad and start pawing holds, your mind full of possibilities, the brush comes out and the shoes go on, maybe it's figured out maybe not. The happy walk, the rat fed, down the hill with a final look back at 'your' problem, no longer just a lump of grey granite but an almost living thing with a sequence marked with a few patches of chalk and a few spots slightly cleaner than the rest. 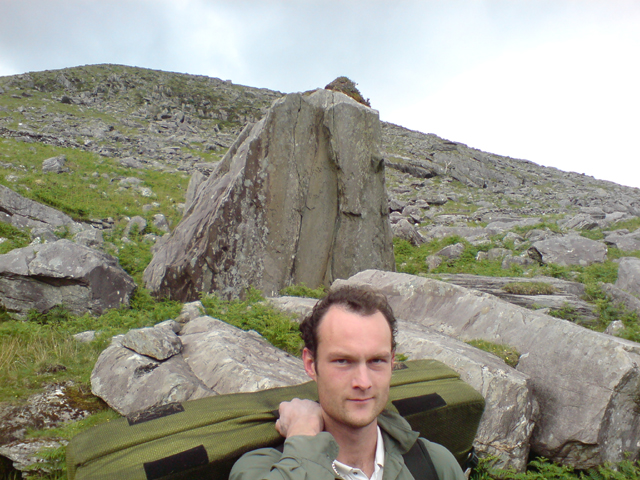 Nice rock shame about the face, Photo by Dave Flanagan.

I know of a few boulderers (devout searchers to a man) who believe in the application of karma to the hunt for boulders. Those bad days where everything is double overhead from a distance but shrinks to waist high when we walk up the inevitable hill accumulate karma for the days when as John Watson so elegently puts it "A weekend of untouched boulders and hero stones, fine rewards in lost places, I pay thanks to the golden ratio: for every good day we must suffer so many bad... the necessary trade-off of awry days, bad weather, midgies and plain stupidity" More here.

The ideal mindset of the seeker is hope rather than expectation. The 'perfect boulder' doesn't exist, its just a theoretical concept to justify all that effort. I think I will leave the last word on all of this to John Gill:

"My friends and I were Quixote knights in search of an elusive grail: the prefect boulder problem".