This is the first in a series of training articles by Nigel Callander. Nigel is in his final year of a BSc in Sports Science in Bangor University, North Wales and also works for the Musculoskeletal Medicine Service in Bangor Hospital. He has had some serious shoulder injurys including a dislocated shoulder that required surgery and a year and a half rehabbing to repair.

At some point in everyone’s climbing career they will end up injured. The question is how serious will that injury be? The continuum runs from a minor strain requiring activity intensity to be lowered for a few days to a career ending injury. As everyone wants to improve, injury prevention is a major issue as research has pointed out that there is a linear relationship between indoor leading grade and the risk of injury (See Reference Wright, Royale & Marshall, 2001). This article intends to give some insight into ways to tip the odds in your favour in order to avoid injury. I won’t be going into the treatments of specific injuries as there are far too many to cover. 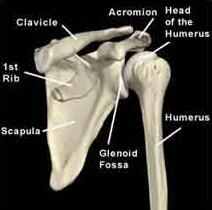 The bones of the left shoulder

The upper limb/hand is by far the most likely site for a non fall related injury in climbing. Unfortunately the shoulder is probably also one of the most unstable joints in the body, the amount of bony contact at any one time between the Humerus (upper arm bone) and its ‘socket’ (the Glenoid fossa) is comparable to that of a standard sized football placed on top of a saucer.

Luckily it’s not purely down to bony contact in order for the shoulder to stay in place, but it emphasises the importance of having everything moving correctly and efficiently in order to prevent injury. It is when these tissues are weak, or not functioning in the correct way that problems arise. These may include anything from general shoulder pain to full on dislocations.

So Why Does This Cause Injury?

When the mechanics of any joint or tissue are changed from the ideal, the area in question begins to work in a way in which it is not designed. This of course can lead to problems and the shoulder is one area that is very susceptible to this. Next time you’re down at the wall, take a look around, especially at those who have been climbing for a long time, chances are they have assumed the standard, ape-like position in which the shoulders become rounded and slouch forward. This simple change in posture alone can be enough to lead to problems (how many people can hear their collarbones crunch in the top of the chest when you bring your shoulders back?) So, first things first, sort out your posture!

In conjunction with these stretches below you should start performing a very subtle action that will, given time, make a great difference. This is known as Scapular Setting. This involves very subtly sliding the scapulae shoulderblades) back towards the spine (effectively pulling your shoulders back) and then dropping the shoulders down slightly.

This shouldn’t feel like much effort. Now hold this position for 20 seconds and repeat 5 times. Do this every time you sit down in a chair throughout the day or equally as often. This should effectively re-awaken the muscles in your upper back to hold your shoulders in this correct posture. The keyword here is SUBTLE!! it shouldn’t feel like a huge muscle contraction. Better still, get a Physiotherapist to show you how it’s done. The same exercise can be performed lying face down on a bed, with the arms by the sides.

Stretching of the upper chest (‘Pecs’ mainly) should be one of the 1st steps. This can be achieved (Figure 1) in a doorway. Just place the hands either side on the doorframe and gently move your upper body forwards. Hold the stretch for about 20-25 seconds and repeat 3 times, at least 3 days a week. Do one set with the arm at 90o and the other at about 45/50o.

Another option is to roll up a thin mat/very chunky bath towel and place this on the floor. Now lie on it with your spine resting on the roll, let your arms and shoulders relax and let gravity do the work.

These should get you on the road to loosening out the shoulder girdle and helping to lose some of the ape like characteristics. 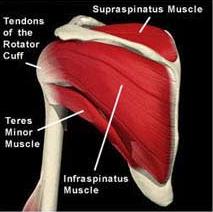 The rotator cuff are a group of 4 small, tendon-like muscles that are could be considered the most important muscles in the shoulder.

Three can be seen here and the fourth, Subscapularis lies attached to the front face of the Scapula. Why are these so important? While the rotator cuff does little to provide force for gross movements (gross movements are bigger movements of the arm such as lifting it or pulling on something), they are involved in every shoulder movement as they effectively pull the head of the Humerus into the socket and firmly hold it there during movements of the shoulder. For this reason, i.e. to stop the shoulder dislocating, it’s extremely important to have them functioning efficiently. They themselves are however very easily injured and are the culprits behind many shoulder problems that climbers experience. In order to keep this important muscle group functioning well and in the correct manner the following exercises are useful. None should be neglected as each targets a specific area more than the other. Also, it is important to stick to the resistance guidelines for each one and build up slowly, chucking big weights around with such small muscles is asking for trouble.

Though these exercises can be performed with free weights, a Theraband is far more useful and possibly more effective applying a more consistent percentage of force to the muscle during each movement. Basically, it’s a whole gym that’ll fit in your pocket. It can be purchased from any Physiotherapist or can be bought on the Web (try ebay). You will need about a 1m piece for most exercises , it comes in different colours depending on how resistive it is and though it’s hard to generalise, yellow is the colour to start off with and most won’t progress to beyond red/green. Any nicks or tears that form in the band will eventually lead to it snapping, just mind your face….otherwise, don’t be afraid of it.

Attach one end of the band to something solid at about belly level. A pillow should be placed between the upper arm and the body and the elbow should be bent to 90o (Figure 2). The upper arm is kept against the pillow at all times. Firstly, set the scapula, as described above and keep this good posture. Now rotate your upper arm (keeping it against your body) so that your forearm forms about a 140 – 150o angle with your hips i.e. turning your arm away from your body. This is your starting position for the movement so there should be a straight line formed by the Theraband between your hand and the ‘anchor’.

Slowly bring your arm across your body, with all the movement coming from the shoulder joint, the movement should take 2 seconds to complete. Then slowly bring the arm back to the starting position this should take between 2 and 3 seconds. Repeat this movement 30 times and do 3 sets, rest for 2 minutes between each.

This is effectively the previous action in reverse. So start with the arm across the body and move the forearm away from the body until 90o. Repeat as for Internal Rotation (Figure 3). 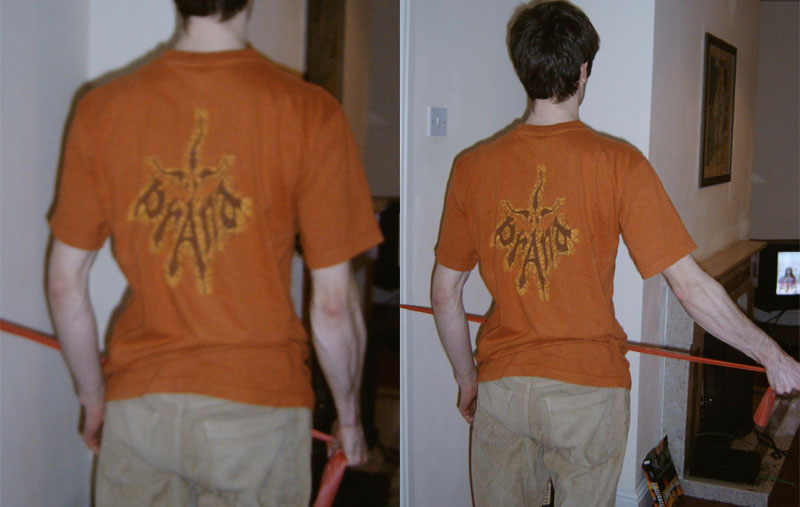 For this, attach the Theraband between knee and hip height on the opposite side to the shoulder that is to be worked. Hold the band with the arm slightly bent and the hand in the ‘thumbs-up’ position. Set the scapula. Slowly move the arm away from the body until the arm forms an angle of about 45o hold for a second before returning slowly to the start position. Keep good form and posture (see Figure 4). Repeat 30 times in 3 sets. 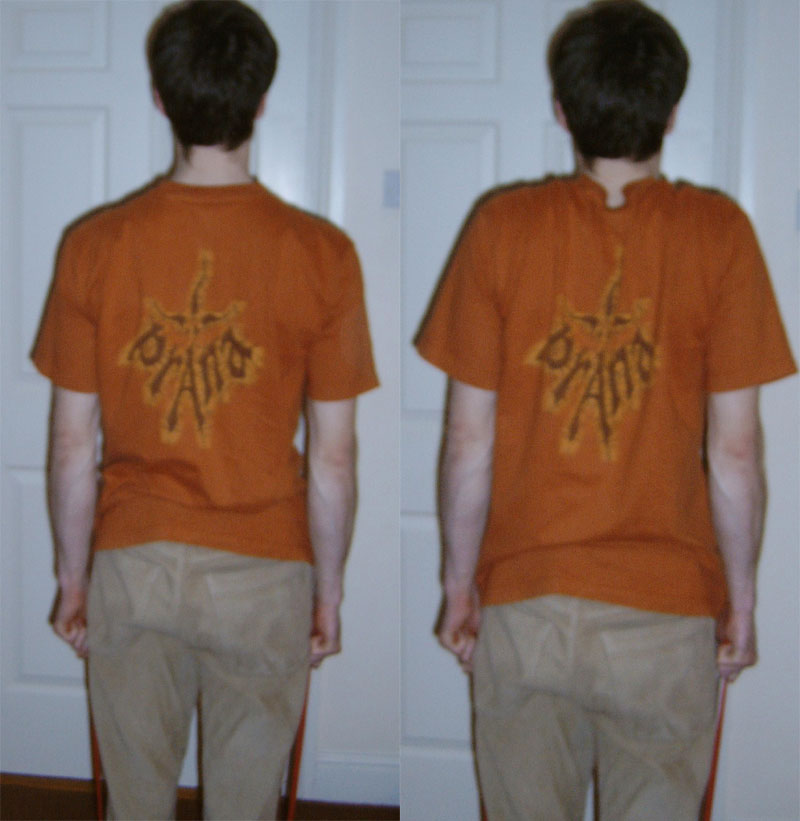 For this one, loop a long piece of Theraband under your feet, taking the band in either hand. Set the scapulae and look straight ahead. ‘Shrug’ the shoulders up, hold for a second, and then lower again slowly and in control, all the time returning to the correct posture with the scapulae ‘set’ (Figure 5).

Fix the Theraband at about the level of the lower back. Two pieces are useful again here. Starting with a good posture, as discussed before, place one foot in front of the other bring both the hands to chest level with the elbows bent. Slowly extend the arms in a punching motion until almost fully extended, hold for a moment and then return slowly and in control to the starting position. Repeat 30 times in 3 sets (Figure 6).

Most people can do quite a few press-up’s anyway, but here’s a few with a twist that are slightly more effective in maintaining shoulder stability. Basically, place a Gym ball (the big inflatable exercise balls) under the hands and perform slow, controlled press-up’s at the end of the up phase of which the shoulders should be pushed towards the ground and the upper back rounded over. These should be performed without any shake. It is best to start with the knees bent before progressing to straight legged press-up’s. Iy you don't have access to an exercise ball it can also be performed with a football under each hand, though make sure they’re the same size.

The main things to remember for all these exercises are:

When the exercises get too easy, put a little more tension on the band or move up a colour, be gradual though and don’t go too far.

I’ll move on to more complex and climbing related shoulder exercises in a later article.Are these training excercises or injury prevention ones In the meantime, these are your ‘insurance’ no matter how hard you climb, if there is only one bit of training that you do, this should be it.

None of the information in this article is given in the capacity of a medical professional. All exercises or advice should be checked with a Chartered Physiotherapist prior to commencement.